We have the biggest conference space in the Northeast and a booming economy. 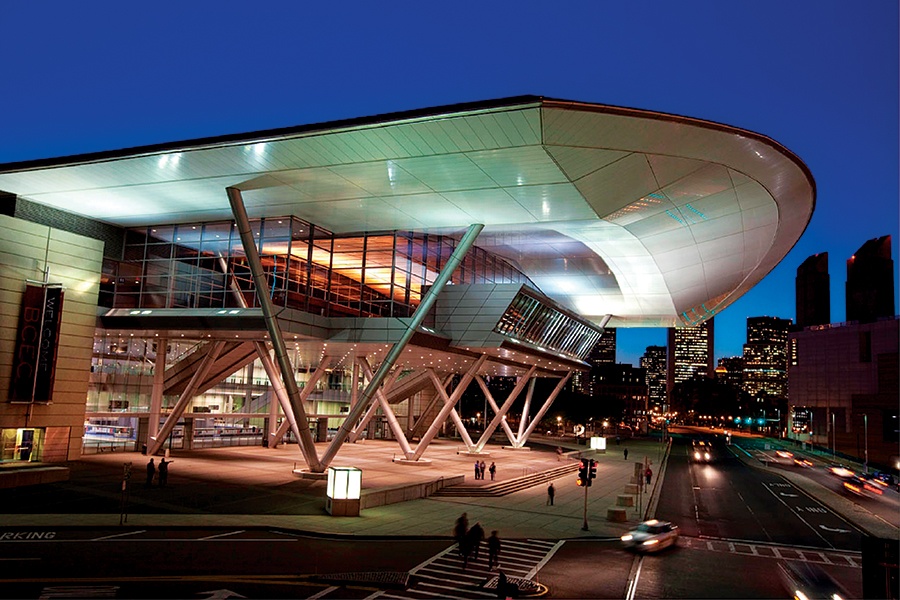 On any given winter night, the streets around the Boston Convention & Exhibition Center in the Seaport are dotted with a few stray souls scurrying from place to place on the wide, windblown streets past the Empire State Building–size behemoth. “Sleepy” is a word you could use to describe the scene. “Comatose” might be more apt. Because while the convention center can get visitors into the Seaport for an event, what happens once they’re here seems to be discouraging them from returning. “We’re hearing it every night” from conventioneers, says Charles Draghi, the owner of the former Bay Village Italian restaurant Erbaluce, who shuttered his eatery due in part to a slowdown in out-of-town traffic. “People don’t want to come back to Boston.”

The numbers support that dismal notion. Cvent, the meetings software company, ranked us a lowly 19th on its list of best cities in which to hold a convention in 2018—and 2019’s convention schedule is shaping up to be a real dud. Aside from the boat show this month, hardly any events will draw more than 10,000 visitors, and most are regional, not national, conventions. Conference-linked hotel bookings at press time, meanwhile, were down nearly 30 percent from 2018. All of which makes it hard not to wonder: Will Boston ever be a top convention town?

While this is the convention center’s problem, it’s not really at fault. Last year, the place combined with the Hynes Convention Center to pump more than $36 million into state coffers in sales and meals taxes and drive 650,000 nights of hotel reservations, and they boosted economic activity by an estimated $885 million. Despite an underwhelming slate of events in 2019, the Greater Boston Convention & Visitors Bureau is excited about its new CEO, Martha Sheridan, and state officials say 2020 and beyond looks bright. It seems, in other words, that what conventioneers find waiting for them outside after the meetings are over is the trouble.

This is where our competition seems to have the edge: Orlando offers balmy weather and countless theme parks; Nashville has a booming music scene and honky-tonk charm; and Chicago is bursting with an electric theater scene and legal booze until 4 a.m. “The destination is what [convention goers] are looking for first,” says Leora Lanz, a BU hospitality marketing lecturer who argues that visitors want authenticity, or some Disney version thereof. “Everyone expects at some point while they’re here to get chowder, eat lobster rolls, go to the Paul Revere House. If there’s a way that the restaurant scene here or attractions here or experiences at the convention center itself can provide a new twist on something traditional, how much more fun for people to keep coming back.”

The irony, of course, is the Seaport might be the least stereotypically Boston part of Boston. You’re far more likely to find a high-end chain restaurant or pricey clothier in the neighborhood than a hip music venue or a beer under $8—let alone a photo op with a guy dressed as Johnny Tremain with a wicked Boston accent. Buried shipwrecks aside, there’s little of historic value south of Fort Point (and nary a cobblestone in sight), and just about everyone who lives there is a one-percenter from someplace else. “It’s still a city,” Draghi says, “but it feels like a gated retirement community.”

The good news is that we don’t have to sit on our hands. Improving the MBTA so conventioneers can get out of the Seaport and see more of the city’s museums and cultural offerings, and keeping it running later so they don’t have to race home like Cinderella, would be a smart investment. We can loosen up the no-fun laws that force bars to shut down early, deny us our God-given right to a happy hour, and besmirch our reputation among the convention crowd’s hardier partiers. Because what future conventions and conventioneers really want is a Boston they can recognize and cut loose in. We should all want that, too.